The Appraiser Who Got My Goat 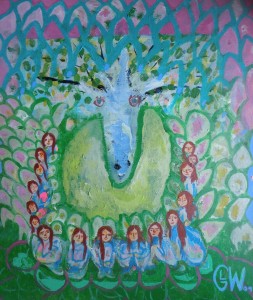 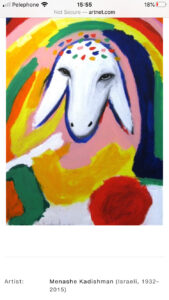 I just got the shock of an artistic lifetime.

An appraiser walked into my 55-square meter apartment to see the goodies.

He sniffed at the painting I’d just carted home from the frame shop.

Oh, a Menashe Kadishman knockoff, he said with the brush of a hand.

I corrected him at once. “No, actually I painted it.”

At this point I’m grinning ear to ear because this appraiser obviously has no idea how intuitive art works.

In 2009, when I painted this work, which I called The Angel Convention, I was living in Tokyo and Israel was not yet on my mind. I’d visited Israel in 1980 and never since. The only famous artist I could recall from the Holy Land was Marcel Janco, and that’s because we were related on my Rumanian father’s side.

The appraiser had his eye on his watch and wasn’t much interested in my excuse for “copying” the Kadishman. But I couldn’t let this opportunity go by to celebrate one more victory in the name of intuition. When we paint without any agenda, without any image in mind, without any famous artist in our heads, yes, even then we can summon the familiar.

That goat’s head started out as a tree–as you can see from the branches.

Then the trunk became a goat’s nose–or snout–whatever it’s called.

And then the angels joined in around the base because I was thinking how sweet it was to paint in the company of other artists.

That’s my excuse for “copying” a Kadishman.

And in 2017, full confession, when I moved to Jerusalem and lived a few blocks down the road from a gallery that had Kadishman’s goat lining a long glass window, I sniffed and guffawed, and thought to myself, who does that artist think he is? A Wakabayashi?

Kadishman left this Earth in 2015. But his goats and their legacy do live on.