The King from My Childhood Dining Room 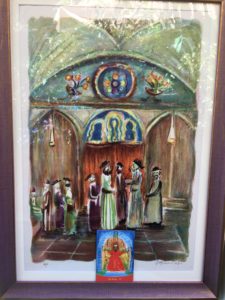 The King in the Dining Room

We’ve all heard amazing stories of pets that have been left behind when their owners move long distances. Somehow, a dog or a cat sets out and follows the scent until reunited with their owners. Now this sounds pretty crazy–I know–but I’m beginning to wonder whether art can do the same thing too. I saw this lithograph in the window of a frame shop two minutes from my new home in Jerusalem. We had just moved and the last thing on my mind after unpacking more art than I have wall space for was to buy art. It was after closing hours so I went home, scratched my head, and wrote to my sister to confirm my hunch. Yes, she validated it. This lithograph had hung in the dining from of our childhood home in Great Neck, New York forty years ago. It hadn’t occurred to me to take anything from the house after my parents sold it, divorced, remarried, and moved on to new homes in New York. I had already moved to Japan. In Tokyo, I had become an artist so it seemed logical to hang my own paintings on the walls or my arty children’s. Over the years I created a deck of 44 Genesis Cards. One of the cards, the King, came from my imagination, I presumed. Jerusalem was a far-off place growing up in Great Neck, and not a destination that alas we would never visit as a family. Yet somehow that vaulted ceiling from childhood crept into the picture when I drew this King pastel in Tokyo circa 2004.

I slept restlessly. I could almost hear my mother telling me to march right back to the shop and buy this Josef Kosonogi lithograph,  what turned out to be the artist’s proof–the first impression from which all the other prints are made. The next morning after the frame shop had opened, I went in to retrieve the childhood memory. When I told the story to the gallery owner she smiled and said that the night before something told her to hang it in the window rather than on the back wall in the shop, where it would go unnoticed. I guess it was just time for the King of my childhood to come home to me.