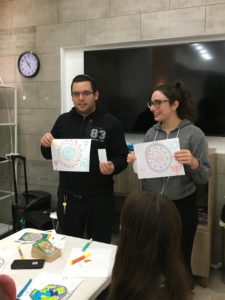 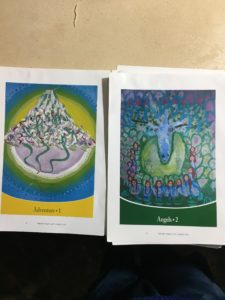 Here’s a new way of using Genesis Art that comes from the newly published Hebrew edition–the Angel card is different than in the English/Japanese versions.

Now if you look at Adventure, you can see the opposite is happening. The composition is mostly inside the circle.

So holding up these two works of art, Adventure and Angel, I asked the twelve workshop participants at Yachad, a lively, creative group, who were ready for an adventure, and many angels themselves, to draw a circle.

Then they were to either draw inside the circle or around the circle. Each participant received a number from 1-6 and because there were 12 here, two each received the same number. 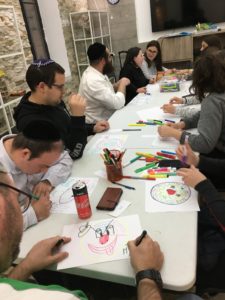 What happened next was amazing. The connections between the artists who received the same number were evident and the fun began as people called out the similarities they saw between artists who had been drawing on opposite sidesof the room.