The Dance of Creation with the Hebrew Alphabet Letters 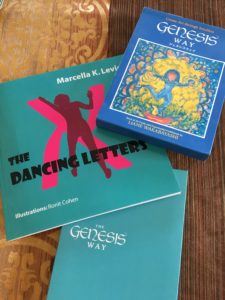 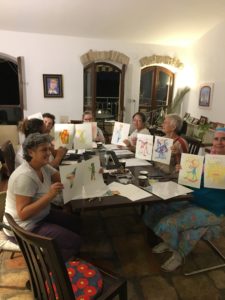 I knew little about the mystical meaning of the Hebrew alphabet letters. But meeting the Dutch dancer Marcella Levie, who teaches the dance forms corresponding to each of the 22 letters in the Hebrew alphabet, something in me is starting to awaken. It’s this realization that calling the Genesis Cards by this name originating in the Torah was no mistake–even though it was a bit risky to choose such a Jewish name while living in Japan, where my students were predominantly Japanese. But hey, I’m Jewish. And what I give to my students comes from fully embracing who I am so that they can embrace who they are.

When a designer suggested that I make the funny little dancing man the cover art for the Genesis Way guidebook, this too I followed without having an inkling that the man could have been dancing one of the Hebrew alphabet letters.

“Hebrew is not just a collection of letters, it’s a holy language,” Marcella explains. “According to the Kabbalists, the letters are the building blocks of the Universe and therefore they are the best way to make contact with the source of life.”

After spending a wonderful few days at Marcella’s house in Amsterdam this past May, she told me that her book, the Dancing Hebrew Letters, was about to be published and she was going to be launching the book in Israel. It took me half a second to offer my house for Marcella’s Jerusalem book launch–which happened in July.

On that warm pleasant evening, when the living room filled with Marcella’s closest and dearest friends, and a few of my own, we formed a circle and followed Marcella’s slow and meditative movements. I was reminded of chi gong, the rebalancing and breathing deeply that comes about naturally when arms and legs are taking small steps to embrace the bigger world and then return to embracing one’s self.

I knew from years of running workshops in playgrounds, parks and zoos, that drawing human life and animals moving so quickly is a supreme challenge if you try too hard. I stumbled upon a technique where you don’t have to try at all. We used this technique tonight while drawing Marcella as she danced the Hebrew Letters.

These photographs show our first-ever collaboration here in Jerusalem on October 17th, 2019. Today, October 18th is my second anniversary since making aliyah, which means becoming an Israeli citizen, a process that has been the ride of a lifetime. Celebrating it in a Genesis art workshop with Marcella Levie was the best present ever. She took me back to that calm space within. Thank you to Suri, Ronit, Ahuva Tamar, Etty, Navah, Joelle, and Miriam who shared the dance and their art in this magical evening.

Marcella is here in Jerusalem to make a video of the Dancing Hebrew Letters! If you are interested in purchasing her book and getting news about the publication date of her video please contact her at: mklevie@gmail.com

If you’re interested in upcoming Genesis art workshops in Jerusalem please contact me for dates and times.  lianewakabayashi@gmail.com. Thank you!