Shalom from Yemin Moshe! Genesis Art Workshops has a new base in Israel!

Genesis Art Workshops has a new home and a new studio location in the quaint 19th century cobble stoned village of Yemin Moshe. I can’t wait to share my inspirational neighborhood with you, both the beauty, the spectacular views and the techniques I’ve brought with me from Japan, my home for thirty years. 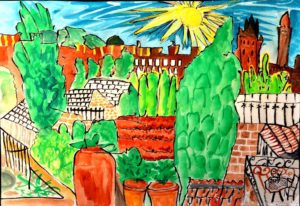 Formerly the first Jewish settlement just outside the walled city of Jerusalem, after the Six-Day War, Yemin Moshe was redeveloped as an artists’ colony by Mayor Teddy Kolek, who saw the potential that artists could bring to the steep and stepped community facing one of the world’s most photographed views of Jerusalem’s medieval city walls.