When the power animal appears powerless 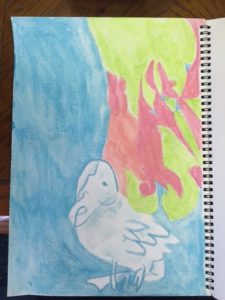 At Ueno Zoo 10/30 I had a drawing experience like nothing I’ve ever had before and it made me mighty uncomfortable. I had chosen as my “power animal” a rather jovial duck who struck me in taking a pose I know well from yoga–Vrksasana, or tree pose.

An interesting aside about tree pose. The great yoga master B.K.S Iyengar once pointed to flamingos at the San Diego zoo to demonstrate to yoga teachers how well balanced these enormous pink birds were when in “tree pose.”

Well, here was my well-balanced duck who kindly maintained its pose for long enough  to draw it without effort. Just as I’m finished with the quick sketch what happens? The duck collapses into a heap on the dirt and vomits. I can’t believe my eyes as it struggles to get up but can’t. It struggles for several minutes while my eyes are popping out from the tension of watching whether my “power animal” actually gets up or drops dead in front of me. There is nothing that upsets me more in this whole world than stumbling upon a dead bird–a phobia kept under check in Japan by a fastidious society that removes unsightly non-moving objects instantaneously. 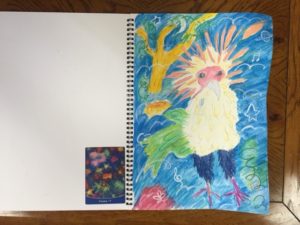 Power animals suggest beasts that are strong, powerful, confident and rulers of the animal kingdom. Interestingly. four out of five of us drawing at the zoo chose birds as our power animals. And it wasn’t as if we were drawing eagles or vultures. We were drawing skinny legged laidback everyday birds, like ducks.

My particular duck for reasons I will never know made a spectacular recovery and just as easily as if the whole spectacle of its struggle hadn’t happened, it picked itself up after a few minutes and resumed a lackadasical tree pose.

Art mirrors life–I believe. Animals mirror people–especially those we are drawn to. Drawn to watching, drawn to sketching.

There are moments in my day when I feel like that duck that is struggling to get up. I am immensely cheered that in the end my duck rallied. It did find the inner strength to carry on.