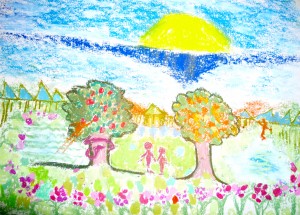 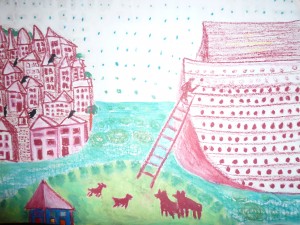 In late September, with the start of a new year in the Jewish calendar, I began a yearlong project to illustrate the Torah with weekly drawings. I’m taking it week by week, knowing that as the year wears on, I’m going to find it pretty tough to draw some of those sections. Well, the first two illustrations from Adam and Eve, then Noah, came out relatively easily, and the third one with Abraham as well.

But then calamity of calamities, I ripped a sheet of white paper out of my sketchpad for my son’s tic-tac-toe game on the long bus ride home from Fukushima where I had been drawing this latest scene, and inadvertantly handed my son the backside of my hard-labored drawing of Abraham with Sarah and Hagar!! That was the last I saw of the drawing. It hurt.

As a writer, I know too well how hours of valuable text can vanish out of tiredness and neglect to press the save button. I’ve not been happy about rewriting long articles from scratch, but I’ve done it when I’ve been on newspaper deadline and had no choice. It’s annoying, even scary, to say the least, but writing the second time around always comes out better. It’s as if all the unnatural stuff gets edited out and what remains in the revision is a purer distillation of what I wanted to say in the first place.

So today I decided to test it out with the lost drawing. Could I recreate what I lost on the bus–a drawing so unlike what I usually do, because this was a deliberate illustration of a scene from the Bible. What do I know about illustrating the Bible? Very little. This is only week 3 into a yearlong project.

As I sat down today to redraw the lost illustration in all it’s detail, I was amazed how easy it actually was to remember what was there before. I made only 3 deliberate changes to the earlier drawing–potentially more accurate costumes, mountains that looked more like Jerusalem and less like Fukushima, and finally, the placement of Abraham’s son center stage leaving it ambiguous whether this son is Isaac or Ishmael. I am happy with these changes and finally can say I’m grateful to have had the opportunity to redo the drawing.

What will come next? Facing these unexpected hurdles is all part of the learning now. I open myself to it all! 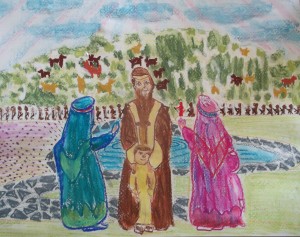