Five years go by in a flash 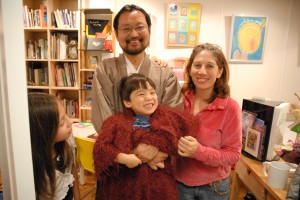 Five years ago, the first week of November, I opened Genesis art Lounge on Nodai Dori, the busy shopping street near our home in the Kyodo area of Setagaya in Tokyo. If that sounds specific, in Tokyo you’ve got to speak very specific because the city is so vast that coordinate points are marked by the names of train stations and the busy shopping streets that radiate out from them.

When I opened Genesis art Lounge I never imagined that the chief beneficiaries of having a fully equipped art studio would be my own two kids, Mirai and Seiji, who were 10 and 5 at the time. They’ve grown up around paint supplies, brushes, origami and washi papers, pastels and pencils — taking for granted art supplies that I could only dream about as a child. 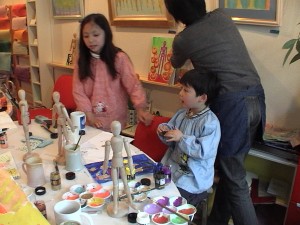 Seiji was still in kindergarten and his passion was Lego building. He’d sit on the floor of the Lounge with a manual across his knees and build kits that took him a full day to assemble. Mirai was a supershy elementary schooler who dashed through the streets hoping that nobody would notice her but when she entered the Lounge, she opened like a flower to students, teachers, parents, other kids . .. .whomever happened to stop by.

By the time I closed the Lounge in the summer of 2009, more than 300 people had taken Genesis art trial, introductory and private sessions. The Genesis Cards had transformed from a computer printer-generated deck to a beautifully high quality made in Japan published product. Genesis Art Workshops had begun to spread to locations far and wide in Japan and I was feeling open to travel without the constraints and responsibilities of operating a business that required that I stay put in one place. I am too restless to be in one place every day but I didn’t know it until I had my own business and had to learn the tough way that being an owner means you can’t be in more than one place at a time. It just wasn’t me to be this way. I got sick. I stopped. I recovered. Although the Lounge was closed, I had 3 years left to pay on a bank loan which this month, finally, I conclude its last payment.

As I reflect on this five year anniversary, was it worth the risk? Was it worth the bank loan? Yes, definitely. Not that it was easy or without sacrifices. Instead of saving for family trips overseas, I was traveling to the bank each month. But we are no worse for it. Mirai and Seiji have grown in wonderful ways. They speak Japanese to their dad and English to me. They dream of visits overseas and because they don’t happen that often I think they will hugely savor the next voyage out.

Genesis art workshops meanwhile have continued from our home studio (aka kitchen table) in Setagaya and from my husband Aki’s carpeted office in Okachimachi. Now comes another turning point. Aki is renovating the office, pulling up the carpet, repapering the walls, getting rid of oversized furniture, basically creating space for new possibilities. A new studio for Genesis art workshops and our wonderful community is in the making! It’s our dream to share this space with you in the near future!

More news to come. I’m off to pack up now.