Art and Synchronicity with the Genesis Cards 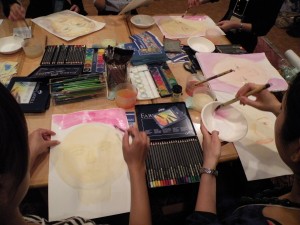 In the early half of the 20th century, Swiss psychologist Carl Jung immersed himself in many Eastern traditions and philosophies. This inspiration led him to originate a new branch of psychology that links the mind with creativity and spirit. Explorations with intuitive art led Dr. Jung to pioneer a branch of psychological exploration that is widely practiced today as art therapy.

While a vast amount is known about art therapy, comparatively little is known about the role of synchronicity in the creation and interpretation of intuitive art. Carl Jung was not only aware of the affinity between art and meaningful coincidences. He had first-hand experience of artistic synchronicity. When a request came from his German friend Richard Wilhelm to write a commentary for his new book Jung had just finished painting a mandala with a golden castle at its center.

“I devoured the manuscript at once, for the text gave me undreamed-of-confirmation of my ideas about the mandala and the circumambulation of the center. I became aware of an affinity. I could establish ties with something and someone. In remembrance of this synchronicity, I wrote underneath the picture which had made so Chinese an impression on me: ‘In 1928, when I was painting this picture showing the golden well-fortified castle, Richard Wilhelm in Frankfurt sent me the thousand-year-old text to the Yellow Castle, the germ of the immortal body.’ ”

Could it really be that this artistic synchronicity was so unusual? No, but art’s potential to synchronize with real life events before they have happened has been a socially taboo subject for so long that even Carl Jung refrained from sharing his most intimate art with the public out of concern that it would not be properly understood. Last November, his family made the decision more than 50 years after Jung’s death to publish and exhibit his deeply personal “Red Book” of writing and sketches. This summer in the USA, the Red Book can be seen in exhibitions in New York, DC and Los Angeles.

This is great news, a green light for artists to finally admit and talk about miracles that occur when art synchronizes with an external event of which the artist had no precognition.

I’ve experienced multiple life-changing synchronicities through art and I believe you can too.

The Genesis Cards and Genesis Art Workshops encourage you to start sharing and talking about spiritually meaningful occasions. When you recognize that art has a higher purpose, to open up spiritual dialogue, to support your soul journey, you no longer doubt the value of “drawing out” and discussing your creativity as a matter of habit.

In Genesis art workshops your own brightly colored paintings often mysteriously match the imagery on the 44 Genesis Cards. These seemingly miraculous connections lead you to believe in your creativity and your intuitive gifts and help you see the beautiful synchronicities of life.